A phrase that is being echoed by conservation experts confirms current conservation issues require a “multi-faceted approach” to tackle problems in human-wildlife conflict, climate change, poaching and land degradation.

The status of conservation across east Africa

Government corruption in poverty-stricken countries means those living with little quality of life are tempted into illicit activities to improve their circumstances by poaching iconic species.  Hides and horns generate high prices and the demand in Asian countries makes anti-poaching efforts harder and harder, with hi-tech equipment needed to combat poachers funded by powerful cartels around the world.


Alongside this, human-wildlife conflict is rife as populations increase exponentially and the need for more land swells human habitations in bucolic areas belonging to wildlife.  Predators are seen as vermin – capable of destroying incomes, food sources and property. Such is the situation that elephants, lions, cheetahs, leopards and now monkeys and ungulates face extirpation in various areas. Meat is a great source of protein and bush meat is a popular custom for many facing the vastly real threat of starvation.

Climate change is having a devastating impact on water quality, creating food scarcity and impacting on soil degradation. Flooding, rising temperatures and unexpected changes in rain patterns mean vital crops are being lost – and for farmers the income they depend on for survival. People are being forced to find other food sources and this tends to be from animals.


Local opinions of wildlife across east Africa tend to be negative and need to be tackled if we have any chance of ameliorating the state of conditions in the third world. None of the problems in east Africa are confined to this area: Asia, South America, parts of Europe and North America are all affected by varying degrees of conservation concerns.
Unable to eradicate issues, despite leviathan efforts to tackle problems, organisations have turned to education as a preventative means to reduce the future impact of worrying consequential effects of our current situation.

The need for education in east Africa

Education is playing an ever more important role as part of the discord that affects humans and wildlife in a critical manner. No one really knows how long our planet can withstand our capacity for endangering animals and destroying habitats but the prognosis is grim. Multi-extinction and weak biodiversity signals the irrevocable destruction of eco-systems and irreparable damage to the planet.

Yet, despite the warnings from experts and organisations, we seem happy to just ignore the damage we are causing and continue on a path of self-destruction. I say ‘self’ as it is all of us who will inadvertently pay the price of this destruction if these warnings continue to be ignored.

Kenya and Tanzania are particular advocates of education programmes and it’s not surprising: both are home to the wildebeest migration as they pass across the north of Tanzania into the Serengeti before crossing the Mara River into Kenya, heading back into Tanzania only weeks later.

Both countries have some of the world’s most renowned national parks as well as those mentioned above: Amboseli, Tsavo, Meru, Ngorogoro Crater, Ruaha, Lake Manyara and Gombe – made famous by Jane Goodall’s lifetime commitment to save chimpanzees in the area.

Both countries have had their numbers of several iconic species decimated with tens of thousands of elephants, rhinos, lions, cheetah, leopards and giraffes senselessly murdered by poaching cartels, funded by rich, prolific people – reportedly, some of which have been working within the governments. Such is the situation that our children and their children may never get to see these species in the wild as they are predicted by experts to be extinct well before the end of this century.

Yet, we now rely on them to solve the issues we have created for them through ignorance, selfishness and greed. It is legacy not to be taken lightly.


Whilst safaris aren’t for everyone, it is important not to take the option away from our ancestors by continuing to ruin the industry as we are. People should have the choice as to whether or not they see iconic mammals in the wild or stuffed in places like the Natural History Museum. Let’s be honest: travelling on the tube and wandering dusty and dimly-lit rooms is not the same as driving across the plains under azure skies and stopping to watch a springbok give birth or see vultures, hyenas and lions squabble over a kill as the sun sets over a skyline of acacia trees and baobabs. You don’t have to like it, want it or care about it, but we must respect wildlife and leave it alone.
Currently, the tourist revenue generated in these areas just can’t compete with the poaching black market for elephant and rhino horn, lion bones and other body parts; probably the reason why governments won’t do more to prevent poaching and protect tourism in the future which won’t exist if there any no iconic species to see.


Trophy hunters claim what they pay to shoot an animal supports local villages and helps feed them as they toss away the viscera of an animal they have killed. Actually, less than 3% of what they pay goes to the causes they wrongly claim to support. If they stopped killing animals and conserved them instead, more money could go to the villages from tourism.
Perhaps due to the level of poverty in east Africa, people care more about the now than the future. When it comes to poaching this is more apparent than ever. If Kenya and Tanzania lose their tourism, vast amounts of money will no longer go towards helping smaller, more rural communities who need the money. How will they survive then?
We have created a huge dichotomy between those who toil to save animals and those who just don’t care at all but also cannot see the long-term effects. People can learn to live alongside wildlife instead of killing it.
By tackling all of these issues through the “multi-faceted strategies” our children can find the efficacious end that we have failed miserably to do. Hence, the reason education is now so important in conservation efforts.

East Africa is a trail blazer in education strategies presently in use:  so many great conservation organisations are seeing the need for using education as a tool to prevent conservation issues in the years to come by promoting wildlife to children and teaching them methods that prevent negative encounters with wildlife.


Since 1982, Jane Goodall’s Roots and Shoots programme has encouraged “children to implement practical positive change for people, animals and the environment by providing teachers with free resources and activities”. Not happy with supporting education solely in Tanzania, the programme is used in almost 100 countries and connects youth of all ages who just want to make the world a better place.  This accolade serves to reaffirm why Goodall is such a wonderful human being if it even needed reaffirming after 57 years spent dedicated to primates.


The Wild Nature Institute is running programmes that educate children, parents, teachers, safari guides and village leaders through multi-lingual books that teach conservation practises to adults and ecological and social lessons to children. They also work with PAMS - whose co-founder and director, Wayne Lotter, was heartbreakingly murdered last week in Dar es Salaam - to provide manuals for safari guides and support community forums that bring people together to protect a critically endangered wildebeest migration corridor in northern Tanzania.


Derek Lee, the institute’s Primary Scientist states, “environmental education is a critical component in successful wildlife conservation. Our materials are helping to fill the need for locally relevant materials so teachers can give their pupils the best available education.”


Wayne’s murder only highlights just how critical the need for education is. If people see conservationists as a big enough enemy to murder them – be it for whatever reason – the problem is more serious than we fear.


Whilst the WNI works tirelessly on one side of the Masaai Mara, over on the other side the Kenyan Wildlife Service have the challenge of a shift in population from rural to urban with the Kenyan population creeping towards 50 million people. For them, the challenge lies in educating people with no wildlife or conservation knowledge and challenging traditional beliefs that animals be used for food and medicine.


These are just a few examples of education methods currently being used by wildlife organisations in east Africa. The fact we are now relying on our children to elicit future conservation is a big worry. It is time we stopped being so Milquetoast about this and stood up to combat population explosions in Africa; stood up to Asian countries’ avaricious want for meaningless ivory trinkets and animal medicine; stood up to foreign trophy hunters whose blood-thirsty cravings are nothing more than an obsession to overcome impotency of character and self-deprecation.


Not for the first time in my life, it is clear we have as much to learn from children as we have to teach them.

I’ve had an 18-month hiatus from conservation blogging but I haven't stopped following the crises that occur daily around the globe.... 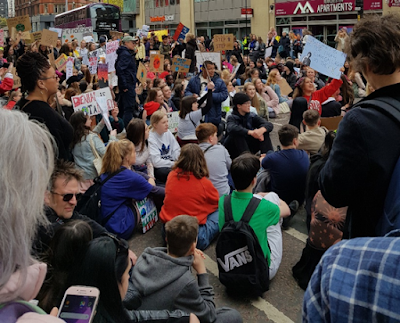